Updated a bunch of links, and fixed the Group Gear and Raid Gear overview pages, which were not displaying Bows.

In other news, Sony will again be offering Double Station Cash. This will run from 12/24 - 12/27. I think this bonus only applies to the SOE Pre-Paid Game Cards.

We have put up our Housing Quests for those who have been asking for them, you can find them in our Special Quest section. New Frostfell quests are live in game. You can feel free to check them out in our Special Section. We have a Level 95 version for higher end players as well as a Level 50 version for the lower end.

All EverQuest Live Servers will be coming down on Wednesday, December 14, 2011 at 3:00 am Pacific for a game update. The servers are estimated to be unavailable for 5 hours. Keep an eye on the EQ Players website and the forums for status updates and for news if additional downtime is needed.

- You can now add more mercenaries to your roster! Unlock slots in the Marketplace and keep the mercenaries with you for when you need them!
- All classes now have a new group of Alternate Advancement abilities available in Veil of Alaris.
- New Hot Zones have arrived! You can now augment your adventuring experience in Crescent Reach, Blightfire Moors, The Great Divide, Stone Hive, Dranik's Scar, Goru`kar Mesa, Plane of Disease, Blackfeather Roost, Sunderock Springs, The Steppes, Vergalid Mines, Direwind Cliffs, Ashengate, Korascian Warrens, and the dreamscape of The Feerrott. To find out more, speak to Franklin Teek and Skal Nethus in the Plane of Knowledge.
- Frostfell has arrived again in Norrath, and Santug's helper is looking for assistance in the Plane of Knowledge!
- Tanya Bekines in Sunrise Hills has a new Guild Hall for sale.

- Corrected the focus effects on some Soloist Ascension cultural armors.
- The price of House of Thule armor templates has been reduced by half.
- Veil of Alaris armor combine items now have the proper icons.
- Heroic charisma has been removed from Veil of Alaris Enchanter visible armor. Other heroic stats have been increased.
- Guild trophies obtained from Veil of Alaris raids now have new appearances.
- Several house items which were only placeable outdoors can now be placed indoors.
- The charms An Ear for Languages and Forked Tongue of the Polyglot will now always have stats, regardless of how fluent your Alaran is.
- Corrected some discrepancies with resonance focus effects on bard armor.
- Veyer's Stud now has the Enhanced Minion XIV focus instead of Tenacity of Kolos.

- Lowered the difficulty for creating a Mounting Board.
- New fletching and research tradeskilled items drop will drop on appropriate creatures in zones outside of Veil of Alaris.
- XVI Distillates are now priced higher than XV Distillates.
- Varlad Rahnta is again selling Metal Hinges in the neighborhoods.

- New Hot Zones have arrived! You can now augment your adventuring experience in Crescent Reach, Blightfire Moors, The Great Divide, Stone Hive, Dranik's Scar, Goru`kar Mesa, Plane of Disease, Blackfeather Roost, Sunderock Springs, The Steppes, Vergalid Mines, Direwind Cliffs, Ashengate, Korascian Warrens, and the dreamscape of The Feerrott. To find out more, speak to Franklin Teek and Skal Nethus in the Plane of Knowledge.
- Frostfell has arrived again in Norrath, and Santug's helper is looking for assistance in the Plane of Knowledge!
- Resplendent Temple - Plannty of Tricks - Players will no longer be able to get the update for handing in a bone marrow to Plann if they are not on the correct step of the quest.
- Valley of Lunanyn - It's a Dog-Eat-Cat World Out There - Corrected the number of Wicked Grendlaens requested in the task description.
- Sepulcher - Breaching the Barrier - Revised the mission to ensure the correct makeup of characters is in play.
- Sepulcher - The Triune God mission will now allow 12 players to enter.
- West Sepulcher - Filthy Lure - The Decaying Pumpkins will now lure swinetor when used.
- Corrected an issue that could prevent Thurgadin and Icewell Keep from ever recovering from a failed ring war.

- Shadowknight - Added Tome of Gouging Blade to the correct vendors and quest rewards.
- Beastlord - Natural Collaboration will now place an effect called Forecasted Aid on your pet when it is triggered. This is a small damage absorption spell that will trigger Companion's Aid when it is broken.
- The Interceptors in the Beasts' Domain have made a discovery and will now offer type 3 augmentations to those who are able to understand them.
- Virulent Pustules is now removed when zoning.

- Fixed an issue where dodge skill caps were set incorrectly for a few classes.

- Parcel Merchants now have the word "Parcel" at the beginning of their tag under their name. This makes it easier to navigate to the merchants using the "Find" window.

- All classes now have a new group of Alternate Advancement abilities available in Veil of Alaris.
- Shadowknights have received a new mount AA: Battle Armored Onyx Skystrider.
- Paladins have received a new mount AA: Parade Armored Pegasus.
- Wizard - Prolonged Destruction and Sustained Destruction have had their mana penalty reduced to account for their conflict with the Gift of Mana line of abilities.
- The warning for having more AA points banked than allowed will now display properly when the limit is over 30.

- The Shatter the Veil achievement now counts for all versions of the Engine Trouble mission.

- Tanya Bekines in Sunrise Hills has a new Guild Hall for sale.

- Mercenary Roster -
- Players can now buy extra mercenary slots on the Marketplace and keep a roster of mercenaries that they can switch between. Mercenaries operate the way they used to, except that if you purchase another mercenary, it will become active and replace the mercenary you had active before (if any). Dismissing a mercenary will cause the first remaining mercenary in your roster to become the active mercenary (though suspended). Transferring a mercenary will cause the target player's active mercenary to be suspended and the newly transferred one to become active.
- To switch mercenaries in your roster, open the Mercenary Management UI.
- Added the new command /mercswitch. With no arguments, it lists the current roster of mercenaries and displays the one that is currently active. Adding a parameter allows switching between mercenaries in the roster.

- Added the "View Only" guild bank item setting (that does not allow for withdrawal). When you promote an item this is the default setting. To withdraw the item, the permission must be changed to a different item setting.
- Manage access in guild plots is no longer tied to VoA ownership.

- Made the map window resizable.
- Added the key map option in Options -> Keys for Potion Belt Slot 5.
- Fixed a minor issue with a stretched arrow in the guild management window.
- The Mend button will now properly depress and un-depress, and will no longer disappear when zoning.
- Fixed an issue where in full screen mode a 3x4 hot bar would resize to a 2x6, and then 1x12, every time the UI was reloaded.
- Changing the ranks of guild members in the access tab should no longer cause the alphabetical ordering to swap. Additionally, issues with the access tab when members are removed should no longer occur.
- Fixed a bug that was causing the guild access list to not update when the hide alts or show offline buttons were enabled or disabled.
- The options window now displays its options as checkboxes instead of large buttons. Clicking on the boxes or label text will enable or disable the options. When an option is enabled, its text is highlighted.

- Corrected a problem that could cause pets and mercenaries to depop unexpectedly in Sarith, City of Tides.

We have re-done a bunch of the maps for Erillion, City of Bronze and Resplendent Temple, as well as Critical Mass in Argath and Resurrecting the Gods in Sepulcher to hopefully make them more visible, the map updates on the pages should make the maps easier to find if you use height filter in those zones (Multi-Floor Zones)

SoE has added their Childs Play item for this year: Santug Claugg's Cudgel Ornamentation and a Gift Version. This is a giant Candy Cane ornamentation. It is in the in-game marketplace for 500 SC and will be up for the next month or so! The Marketplace also mentions 100% of the profits going to the Charity!

An Image of it: 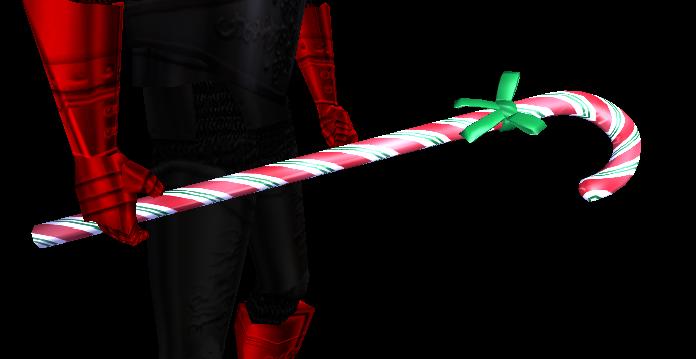